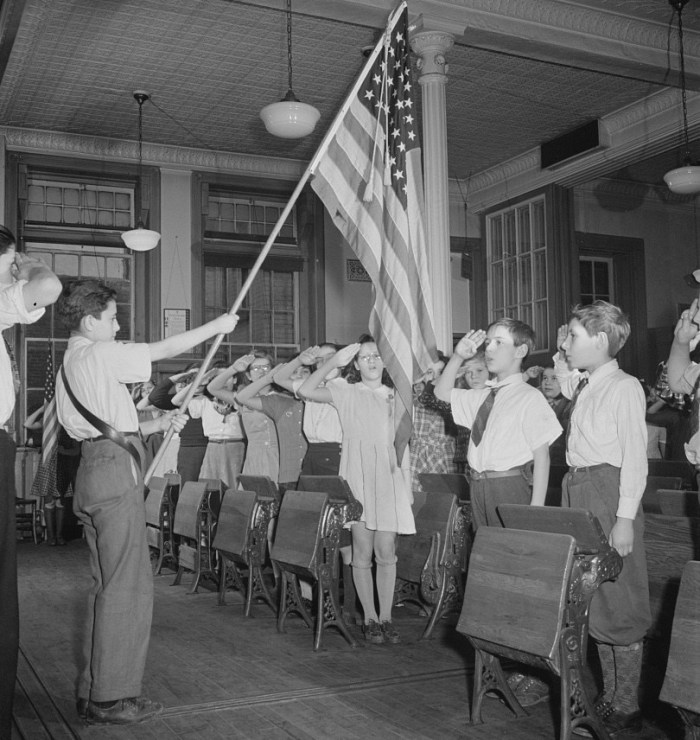 With the 2016 presidential election looming, we’re inundated with a number of messages from both major political parties. Many of these messages invoke patriotism as a reason to support one particular party or candidate over another. Republican candidate Ted Cruz, for instance, refers to “faith, family, patriotism” as fundamentally conservative values. Lest one think that only Republicans appeal to patriotism, in a Veterans’ Day speech, Democratic candidate Bernie Sanders said: “If patriotism means anything, it means that we do not turn our backs on those who defended us, on those who were prepared to give their all.” It’s no surprise that both the DNC and the RNC have adopted the colors of the American flag for their logos and websites. After all, who would object to patriotism—love for and pride in one’s country?

I think it’s important to keep in mind that while patriotism can be a political virtue, it can also go wrong. One need not conjure up images of Nazi rallies in the 1940s or pro-Taliban demonstrations in Afghanistan to see instances of patriotism that many in our current political climate would take to be problematic. Our own political history should teach us that we ought to be cautious about patriotism given the opportunity for it to run awry. As just one of many instances, consider how claims of patriotism have been used in the US to justify discrimination against individuals with disabilities, particularly disabled immigrants. At numerous times in our nation’s history, immigration law has been used to keep out individuals that we think would ‘pollute’ or ‘dilute’ our country. Loving our country, it was thought, requires us to protect it. And protecting it requires us to keep the wrong kind of people out. The ‘Red Scare’ following World War I led to tightened controls on immigration as a way of keeping out those who had different political views.

But it’s not just suspicions of anarchism or socialism that led to restrictions on immigration. The US has a long history of using disability to the same end. The Immigration Acts of 1882 and 1924, for example, allowed for government officials to restrict the immigration of those who were either disabled or even likely to become so. In the early 20th century, immigration officials were told that “any mental abnormality whatever … justifies the statement that the alien is mentally defective” (Nielsen, 103), a judgment that could be used to prevent an individual’s immigration into the US. (Perhaps not surprisingly, such laws resulted in a higher deportation rate for individuals from Asia than from Europe.) These, and other laws, were used to exclude people from immigrating or to push them underground once they were in the country. In the late 19th and first few decades of the 20th centuries, numerous cities—from San Francisco to Chicago—enacted laws that prohibited those with disabilities or other ‘mutilated or deformed bodies’ from being in public.

The use of ‘disability’ as a way of marginalizing or discriminating against individuals in US history does not just apply to the disabled. It was also used to justify slavery in the 19th century. For instance, Samuel Cartwright, a medical doctor and proponent of scientific racism, argued that “blacks’ physical and mental defects made it impossible for them to survive without white supervision and care” (Nielsen, 57). In the 1870s, influential educational leaders argued that attempting to educate women led to their becoming disabled. And as late as the 1940s, the claim that Native Americans were particularly prone to disability was used to justify failing to extend full rights to indigenous population.

Finally, the US has a long history of using appeals to patriotism as a reason to forcibly sterilize the disabled. Supreme Court Justice Oliver Wendell Holmes’ claim that in the service of the “public welfare … three generations of imbeciles is enough” defended the constitutionality of such a practice, which is not only legal but still practiced in numerous states. The reason for such sterilization, presumably, is for the good of the American people.

So, this coming election, feel free to be patriotic. But make sure that the vision of our country that you’re supporting and working to enact is one that is worthy of your love and pride. For not all patriotism is worth it.

Quotations from Kim E. Nielsen’s A Disability History of the United States (Boston: Beacon Press, 2012). For a discussion of how eugenics influenced US perceptions of disability and contributed to immigration restrictions, see Daniel J. Kelves’ In the Name of Eugenics (Cambridge, MA: Harvard University Press: 1985).